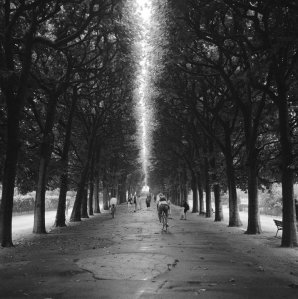 I have been on pilgrimage this spring and traveled with boon companions.  I’ve kept late nights with Dorothy Day, toted Thomas Merton on the train, chuckled with Flannery O’Connor over her tales of kindred freaks, and got lost with Walker Percy in the cosmos.  They’ve come with me across the country, tucked in my over-packed bag—from Boston to Austin, Florida to Minnesota, Manhattan to the Bronx.  No matter that all four of these fellow pilgrims are dead, for the books they left behind have rendered each a perpetual Lazarus, resurrecting the writer with each (re)reading.

Moreover, I’ve had the pleasure of reading these writers in community.  One of the joys of teaching is sharing powerful, life-changing books with my students.  Each spring semester, I ritually invite the men and women in my American Catholic Studies Seminar to accompany me on this literary pilgrimage.  From January to April, we read Seven Storey Mountain, The Long Loneliness, Wise Blood, and Love in the Ruins. Together we trace the steps of young Merton as he becomes an accidental pilgrim in Rome, haunting her churches and devouring her art; we sit with Day in the dark of prison and walk beside her through the gritty streets of the Lower East Side; we follow O’Connor from rural Georgia to the literary metropolis of New York, and follow her back to Georgia when illness condemns her to a life of exile; we accompany Percy as he discovers his vocation to be not doctor of the body but physician of the soul, trading his Columbia M.D. for the considerably less prestigious role of Catholic novelist.  We conclude the course by reading Paul Elie’s literary biography of the Fabulous Four, The Life You Save May Be Your Own, the narrative of “a journey in which art, life, and religious faith converge.”

The students learn from Elie that the lives of these four contemporaries were interwoven yet never physically intersected.  Instead, their moments of connection occurred through acts of imagination. They were all engaged in the same project—the pursuit of meaning in a chaotic and fallen world, and the search for God in a world that denies his existence.  Each carried out this search by means of the word, writing the stories of their own lives, both directly, in the form of essays and memoirs, and indirectly, in the form of fiction and poetry.

As fellow Catholics, they were members of the same brother- and sisterhood, the Mystical Body of Christ.   They shared in common the idea of the word being born of the Spirit and, also, of the Word (or the Logos) as sign of God in the World.   For them the act of writing was sacramental, inspired by the Spirit in the same way the disciples were inspired to speak in tongues.  They believed that through the use of mortal materials (pen, ink paper), writing connects the ephemeral with the eternal, the material with the spiritual, the human with the divine—to disclose what St. Ignatius termed, “God in All Things.”   While it’s true they never met in person, clearly they didn’t have to.  United by this ambitious, counter-cultural project, they already knew one another in a deep, essential way.

The discovery of this “virtual community” of writers is thrilling to my students.  Saavy users of social media, they have discovered that technology-driven attempts to create community often foster alienation instead.  The cumulative effect of seeing endless pictures of Facebook friends traveling, going to parties, and having fun tends to make one feel deprived and depressed.  Instead of the false bonhomie of FB, they sense in this “School of the Holy Ghost” genuine community, one founded on shared faith and vocation, and shored by sacrament and sign rather than posts and status updates.  They also realize that the “church” formed by these four wisdom-seekers is not unlike the shared community we have formed in our own classroom.

On the last day of the semester, we observed a final spring ritual—I asked the students to identify which of the writers each felt the strongest connection with.  As the conversation moved around the table, I was touched by the poignancy of their responses.  Through the agency of the imagination and the power of the word, each had discovered a deep kinship with one of these four fellow travelers whose skin we’d lived in for a while.  The final student concluded the class by quoting the best lesson Thomas Merton had taught him: “Friendship is the most important thing, and it is the true cement of the Church built by Christ.”   Then we parted friends, our time together having come to an end.  We resumed our separate journeys beyond the classroom door, together and alone, with Merton, Day, O’Connor, and Percy walking beside us.

This entry was posted in Uncategorized. Bookmark the permalink.